Contamination is the result of various types and sizes of particles. Predictably, the smaller the particle the more difficult it is to filter out of the air. HEPA filters are ideal for very small particles, measured in micrometers or microns and are represented by the symbol µm. To put particle size into perspective a human hair ranges in size from 17-181 microns in diameter, most allergy causing pollen is 10-40 microns, duct particles can be as small as 2.5-10 microns, bacteria are generally in the range of 0.3-5 microns and viruses, the smallest particles, range in size from 0.004-0.1 microns.

HEPA filter media is a fibrous media that is typically made of borosilicate glass microfiber elements. Filter media is manufactured so that it creates a tight labyrinth or maze of fibers, while maintaining a massive amount of free area. As air passes between and around the tightly wound fibers the velocity of the air decreases until the particles are ensnared by the glass fibers.

With an efficiency rating of 99.97% at 0.3µm, a common misconception is that HEPA filters do not remove particles smaller than 0.3µm. This is untrue because HEPA filters do not act like a sieve where particles above a certain size are prohibited from flowing through while smaller particles are allowed to pass through, but rather use four different mechanisms of filtration to trap particles of varying sizes effectively.

Filtration efficiency percentage is a function of the ratio of upstream particle concentration compared to the downstream concentration that has passed through the filter and is defined by the equation below.

Filter performance is sometimes displayed as penetration percentage instead of percent efficiency. Like efficiency, penetration is also a function of upstream particle concentration compared to downstream concentration that has passed through the filter and is defined by the equation below. 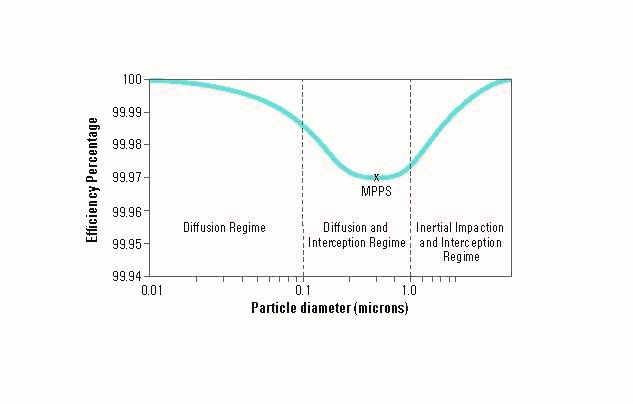 Since most of the filtration mechanisms rely on airflow to be effective, airflow rate will affect filter performance. Higher airflows cause an increase in larger particles to be filtered by inertial impaction and interception while at lower airflows smaller particles have higher Brownian Motion increasing the number of particles that will be captured by diffusion. As a result, change in airflow rate shifts the filter efficiency curve and alters the MPPS. For expected filtration results and efficiency it is important to always follow the manufacturers recommendations for airflow. Certification standards and factory testing ensure that the filtration efficiency listed on the filter label or in the test report is the minimum efficiency throughout the recommended airflow range for the filter.

In North America, the guidelines and recommended practices put forth by the Institute of Environmental Sciences and Technology (IEST), IEST-RP-CC001, -CC002, -CC007, -CC021 and -CC034 are the most widely used. In Europe the standards setup by the European Union, specifically EN 1822 are followed. EN 1822 references ISO 29463, a standard that the International Organization for Standardization (ISO) is working on. Ideally, in the future ISO 29463 will be used worldwide, but it has yet to be adopted in North America and needs to be used in conjunction with EN 1822 in Europe.  Below are two tables, one from IEST-RP-CC001 and the other from EN 1822-1 that go over the filter types or filter class and groups and compare them to their corresponding minimum efficiency percentage and leak penetration. 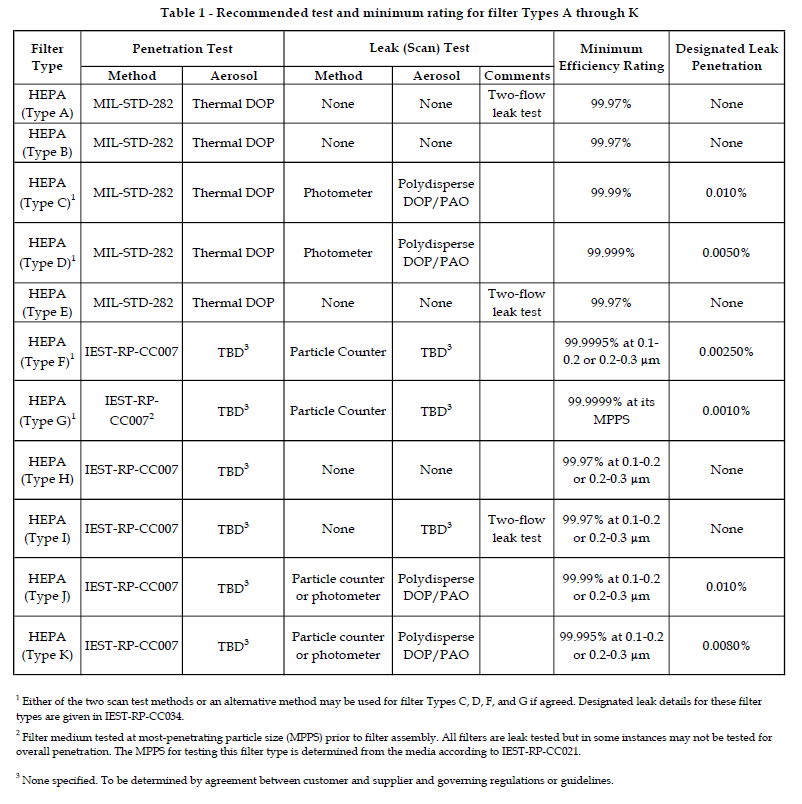 All filters that have been manufactured and tested in accordance with either IEST or EN 1822 will have a label and a test report available that state the filter’s performance. The information displayed on the labels and reports will be defined by the standards or recommended practices to which they have been tested to. These labels should display some combination of the following information but will differ depending on standard and manufacturer:

When selecting a filter ensure it bears a test marking in compliance with IEST or EN 1822 and be sure to select the right type or class and grade of filter for your application. Remember that minimum filter efficiency is the minimum efficiency for the MPPS listed and that your filter efficiency increases with both larger and small particle sizes.